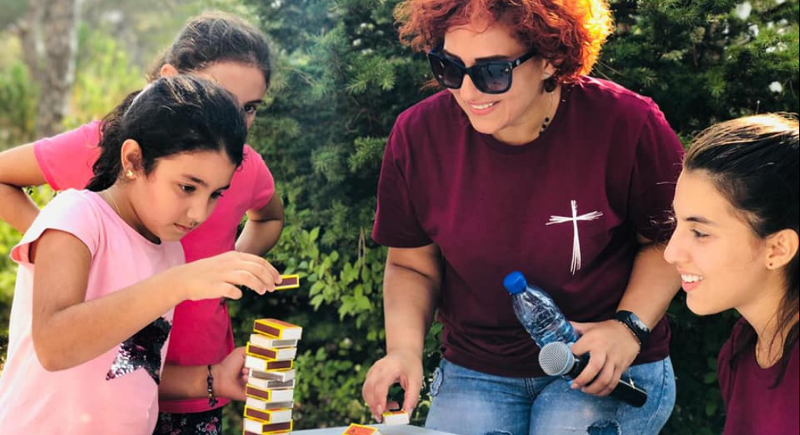 “Do not be afraid, open the doors of your hearts to Christ”

“Do not be afraid…” This is what the lay missionaries in Saint Vincent’s family -Lebanon MISEVI were preaching at their apostolic missionary camp.

The camp was organised by the Lazarist’ priests led by Father Charbel Khoury with the participation of four other priests, two nuns from the Daughters of Charity and 15 laymen in the Chouf-Mount Lebanon region. The area is part of ​​the Maronite Diocese of Sidon, which is a mixture of several denominations and sects, where the Maronite community, from the Roman Catholic Melkite, the Evangelical Church, and the majority of its inhabitants are from the Druze Unitarian community and are not Christians and are considered closer to Muslims.

It was a remarkable experience in a region where Christians live, as a minority among the majority of the Druze community, the so-called “after return,” which means return to their villages and areas after the War in Mount Lebanon, a civil war between Christians and Druze in 1983, and the Christians were expelled from their homes. Their lands were destroyed, they were robbed, and at that stage they suffered from kidnapping, slaughter and all kinds of fear and intimidation …

Even today, these people are still wounding and hurt.

There, we went out to five parishes, carrying with us the joy and the Word of our Lord and His calling for us not to be afraid because he is with us “to the end of the time.”

We met them in the daily Mass where we broke together the “bread of life.”

We met them in children activities, which gathered about 80 boys, including Muslim Syrian refugees, and Druze.

We met them in youth meetings that carried the ideas, questions and concerns of young people in the light of the Word of God and the teaching of the Church …

We met them during women’s gatherings, which included about 70 women share with us the role of women in her family and the church, especially in that region.

We met them during the elderly activities in which we share a charity meal.

We met them at a religious concert that included all religious, political, civil and social figures. It was a joy to see their church filled with Christians and even non-Christians.

There we have experienced with them the power, the joy and the presence of the Lord in our lives.

There we knew that fear with Christ is becoming courageous and daring to proclaim the Good News;

How can we not experience the power of the Lord when spiritual hymns are heard and Mass is held in the heart of the Scout City, the largest gathering place of Walid Jumblatt, the largest leader of the Druze community …

Yes, together we have experienced that when we open our hearts to Christ, there is no place for fear.

There we said that we, Christians, are children of this land and this region. We were and will remain because we believe in Christ who planted us in the heart of the mountain to be a living testimony proclaiming the “Good News of Love.”